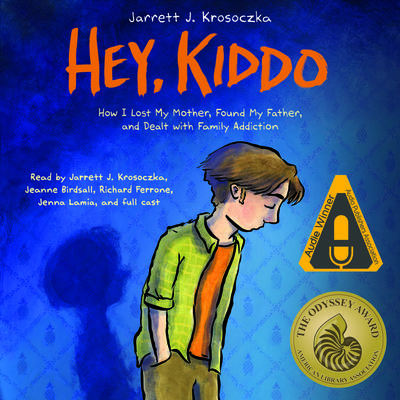 In September 2019, acclaimed author of the graphic novel Hey, Kiddo, Jarrett Krosoczka, came to Fitch High School to give a presentation to sophomore students.. Krosozcka has received numerous awards, but not only for this novel, as he has also written 34 other books, including the Lunch Lady series.

Krosoczka talked about his childhood, which is featured heavily in his graphic memoir. He spoke about some of the stories he remembers from his youth, including The Mouse and the Motorcycle (saying that it had inspired his imagination), and Sneetches and Other Stories (claiming that the concept of disembodied pants running amok had given him nightmares).

Krosoczka also mentioned the comics and cartoons that he had liked as a child and teen. He mentioned Snoopy, Calvin and Hobbes, and the X-Men as being among the most influential. In his presentation, Krosoczka explained  that “Comics really lit up a fire in me.”

Stating,“I don’t remember a time in my life when I did not draw,” Krosoczka spoke about his early interest in storytelling. He demonstrated this to his audience through the example of an assignment from when he was in third grade, in which he had to write his own Greek myth. Krosoczka emphasized the importance of images as well as words to tell stories, stating, “You need to read the pictures as closely as you read the words.” He also expressed that “Illustrations are there to tell the story, not just decorate.”

However, despite Krosoczka’s early interest in writing, he was not an immediate success. A story that he had written, “Hello Sid the Slug,” was submitted to and rejected by eleven publishers. His next story, “Got a Haircut,” received a similar fate. He suffered two years of rejection, sending postcards with his illustrations to 80 publishers.

His first book, Hello Monkey Boy, was finally published by Random House. He was mailed a photo of a cake with Monkey Boy on it, made for a young fan, and has kept it to “remind me of who I work for.” In his own words, Krosoczka looked upon this “as a happy ending for the kid who grew up in chaos but liked to draw.”

Krosoczka gave a TED talk in October of 2012, on short notice. After a bit of uncertainty, his wife advised him to talk about his childhood. According to Krosoczka, “Everything I said and did would be on the TEDx Youtube page,” and he was initially hesitant to open up about his difficult childhood. However, his video went viral, even becoming the TED talk of the day.

Unfortunately, as Hey, Kiddo was in the process of being written, Krosoczka’s mother, Leslie, started getting arrested again. Eventually, she died of her heroin addiction. About his thoughts on her death, Krosoczka said that “I knew that there would be no new pain, no new disappointment.” He also stated, “What I learned is that she chose drugs once, and that was when she was thirteen years old.”

When speaking about how he came to write Hey, Kiddo, he “knew that the narrator would be sixteen, seventeen years old.” Krosoczka used all of his senses to help remember his childhood, utilizing his grandparents’ perfume and aftershave as well as the touch of old toys. Krosoczka also drove around the town, taking pictures of the places he knew would feature in his book.

On the topic of the art, Krosoczka said that he chose orange as the “key color” for the book because of one of his grandfather’s pocket squares, which later became his daughter’s safety blanket. The pictures were drawn using sketches on a light box, which were gone over with a brush pen. He then drew in the grayscale and lined it up with the outline using Photoshop. The orange was then layered over.

After his speaking event, Krosoczka had lunch with a select group of students and teachers to connect more with them personally and not just through his graphic novel, Hey, Kiddo. We were lucky enough to get to interview Krosoczka during lunch. When Krosoczka was asked, “In the book when you tell Leslie that she is not your mom and that Shirley is your mom, how did you come to that conclusion?” He replied “Slowly over time, uh… but, definitely when you’re in the greeting card section of CVS, and you’re reading throughout the mother’s day cards, like none of these, fit the description of how she fit into my life.” Krosoczka was also asked which scene he felt was most integral to the story, to which he replied, “probably the revelations of learning about my mother’s drug issue, because I’m able to show through the character’s body language what they were going through.”

A final anecdote Krosoczka shared reveals how much thought went into the creation of Hey, Kiddo. There was some indecision when it came to the title and cover of the book. The final draft of the book was titled “To the Moon and Back.” Later, at his mother’s funeral, Krosoczka realized that he had to title the book Hey, Kiddo, after reading it repeatedly in letters she had written to him. Despite the saying, people do tend to judge books by their covers, and this led to some indecision concerning the front of the book. After several ideas, Krosoczka finally chose the one we see today.